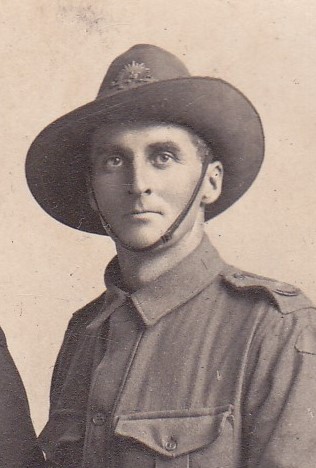 Personal Information: Garnet was born in 1883 to Edgar and Fanny Kelly, immigrants from the Isle of Man. He had two sisters; Lorna Gwendolyn Kelly and Pearl Clemence Kelly. He was the only son and grew up on a farm near Yankalilla called Anacotilla. He went to Prince Alfred College for his schooling. Garnet was my grandma’s dad’s second cousin. Garnet was a man of many trades; he could turn his hand into anything it seemed. He helped design and build a pipe factory for Humes, and consequently he had a lot of shares in this company. He also built a bridge near Normanville and there is also a reserve named after him. This is due to the sum of money he left the Yankalilla Council to plant trees in his remembrance. The trees still stand today in his reserve. After selling their farm his parents moved to 75 Hughes Street, Unley, SA.

Role in the War: Garnet Kelly was in the 10th Field Company Australian Engineers which was part of the 3rd Division, 1st AIF. He enlisted on the 13th March 1916 at the age of 32. Quite tall at 5 foot and 11 ¾ inches, he had a fresh complexion, grey eyes and dark brown hair and was a member of the Methodist Church. He embarked from Melbourne aboard the HMAT Runic on the 20th June 1916 and arrived in Plymouth on the 10th August. He spent some time in hospital and traing in England before being sent to France on the 23rd of November. Less than 2 months later, at the age of 33, he was shot by a sniper on the 8th of January 1917, while he was repairing a trench around the time of 10:30am. He was the first causality in the division. He did not suffer as his death was instant.

Interesting Information: One of the saddest things I found out while researching was when I found out about his girlfriend. Her name was Lea Salome, and she owned an Epicerie shop in France and she was French. Garnet was good friends with both of her brothers, who both died shortly after he did. Lea continued to write letters to Garnets mother and sisters. I thought this was such a touching piece of information and a presentation of true love. Lea along with her family erected a marble cross above his grave.

Image from the "Observer" 3rd February 1917 sourced through Trove