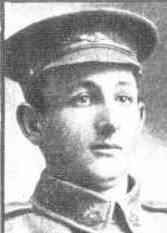 Ernest Frederick Yates was from Milang in South Australia and at the age of 23 years enlisted in the AIF. Ernest joined the 27th battalion and was the son of Ellen Mary Yates. He had no previous military experience, nor had he been convicted by any civil power. Ernest was 6' 1" tall, had a medium complexion, brown eyes and brown hair.  Prior to the war, Ernest attended Lake Plains School, his enlistment papers suggested that he was a fisherman in the Milang area and had never been an apprentice, however his father, William described his calling as Farmer and Dairyman in his Roll Of Honour Circular. He had never married and his next of kin was listed as his mother Ellen.  There were no medical conditions listed at the time of enlistment and his nominated religion was Church of England. The only distinctive marks that were recorded were vaccination marks. Ernest enlisted in Adelaide before he departed from Port Adelaide.

Ernest enlisted on the 9th of May 1916 departing on the Ballarat from Adelaide on the 12th of August,1916. He arrived in Plymouth in the UK on the 30th of September of the same year and marched in at Rollestone on the 30th of the same month.

After two months he proceeded across to France departing from Folkestone on the 16th of November 1916 arriving at Etaples on the following day, the 17th. On the 5th of December 1916 he was taken on strength to join the 27th battalion. He was attached to the 7th Australian Military Machine Gun Company.

Only 6 months later on the 3rd of May 1917, Pte Ernest Frederick Yates (5414) was killed in action during the 2nd Battle of Bullecourt. His service record shows no other information about that 6 months. His personal effects that were sent home included some letters, spectacles which were in a case, a pipe, handkerchief and a kitbag handle.

Pte. Yates’ remains were never found and he is remembered on the Australian National War Memorial at Villers Bretonneux.

Image from the "Chronicle" June 16, 1917 sourced through Trove